“It allows a girl to glide.” Kim Jones made this observation of Moodymann’s Shades of Jae, the house track he said he’s long wanted to use in a show—and did this afternoon—after saving it specifically for womenswear. Jones’s comment also applied more broadly to a collection in which a bass line of rigorously curated, classically-flavored silhouettes and color progressions was played against an irresistible decorative sample of archive Antonio López illustrations. This was mixed into the fabric of these clothes and accessories via the radically accomplished artisanal techniques that live at the house of Fendi.

The models glided out from a newly-configured backstage—where the vibe was light but Covid-19 regulations strictly observed—down a runway whose arches echoed the house’s Roman home, the Palazzo della Civiltà. Other points of continuity included the white-to-black color progression that acted to sandwich the riotous López-focused central filling, and the creative collaboration of Silvia Venturini Fendi and Delfina Delettrez Fendi, both of whom joined Jones at the close.

Even the big reveal of this collection, the decoration, was not a u-turn but a return. Jones said he had dug up a Fendi logo drafted by López during his period of collaboration with Karl Lagerfeld. Said Jones of López: “He was a big, big fashion influencer for a lot of people, but is not so talked about. He had this relationship with Karl and with Fendi, and he helped shape so many strong visions of women, because he loved them: that feels very authentic and topical.”

The illustrations drawn from the López estate’s archive originated, Jones said, as the 1960s transitioned into the 1970s. Here his work was introduced via oversized brushstrokes, then zeroed-in upon via one particular drawing, a rouge-lipped profile of Jane Forth that was abstracted into the pattern that contoured four vivid intarsia and jacquard looks. Color became more impactfully calorific as further illustrations of wavy-haired and cherry-lipped rainbow-framed women were worked into kaftans, a fringed tapestry-woven Baguette, intarsia leather thigh-highs and silks. Plexiglass jewelry by Delletrez was shaped in gold-edged transparent lily leaves, another López signature.

Many looks remained illustration free, including some Moodymann-perfect, bouncily-fringed dresses and a series of diagonally-striped silks (which featured that archive Fendi logo as a sub-pattern) and a complementary marabou jacket over rose gold tailored silk pants. Yet even without the figurative signposting, these looks echoed the aesthetic of the period in which López was working, and seemed further to echo a period (and in Erté, an illustrative style) that to an extent prefigured it. Or as Jones observed: “There was the 1920s, the 1970s, and now the 2020s, these fifty year periods. And the 1920s is when Fendi was founded, so it all rolls into one thing.” Continuity: it allows a girl to glide. 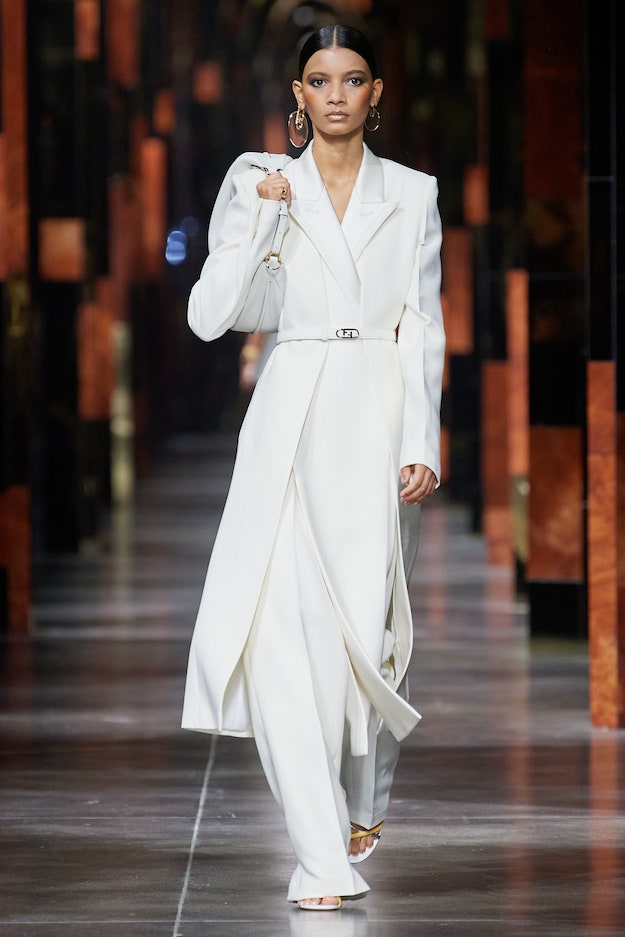 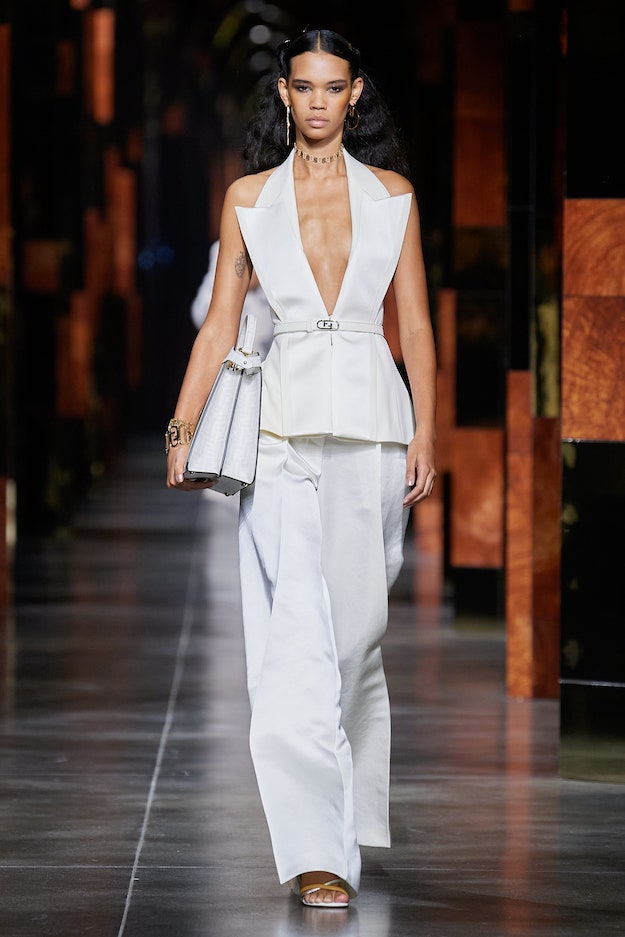 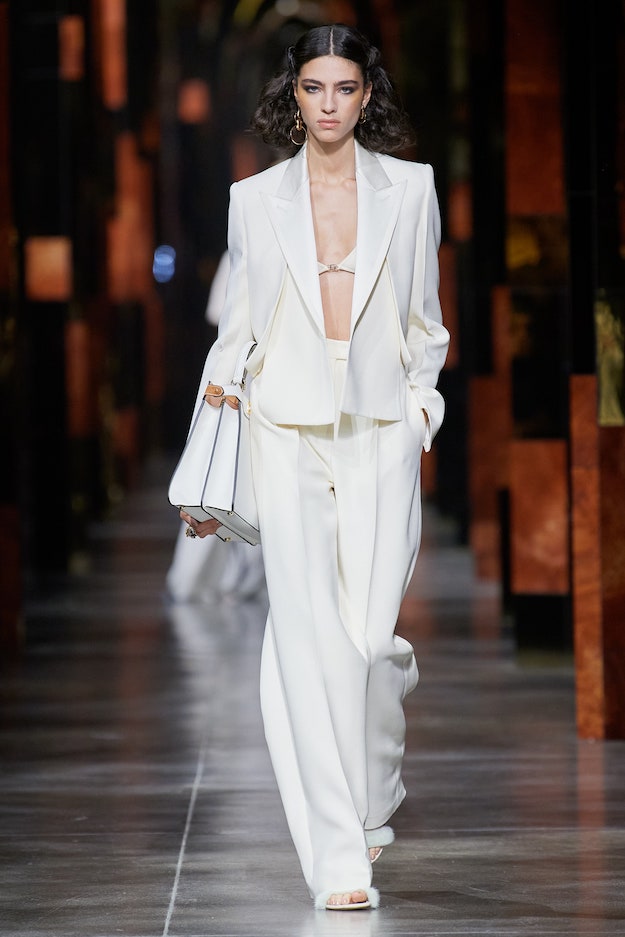 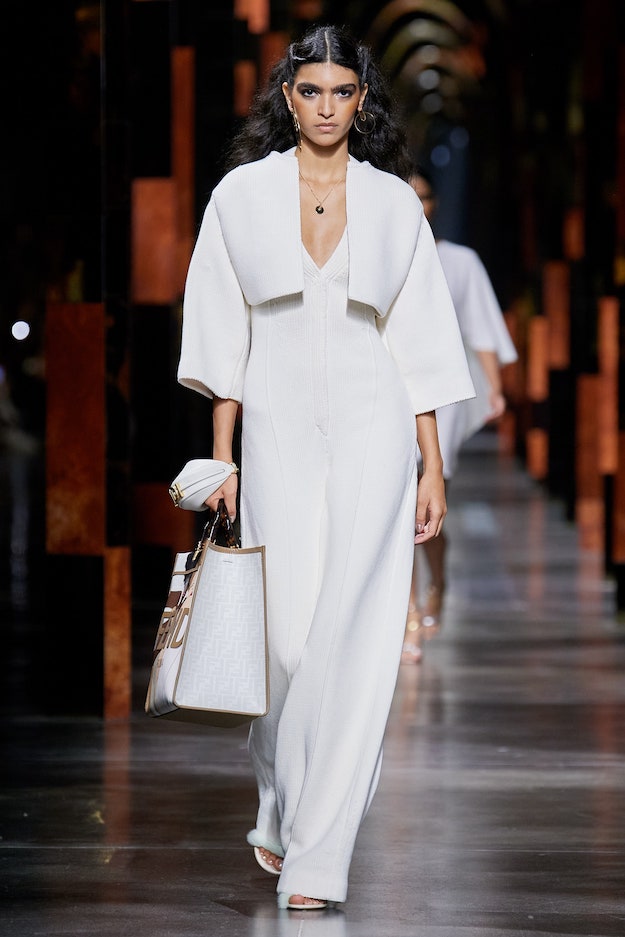 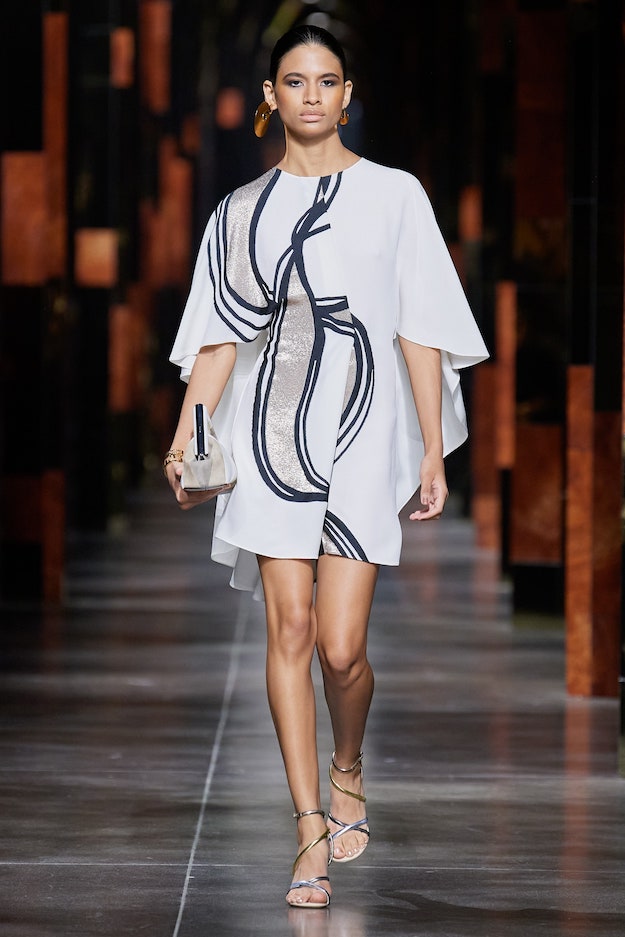 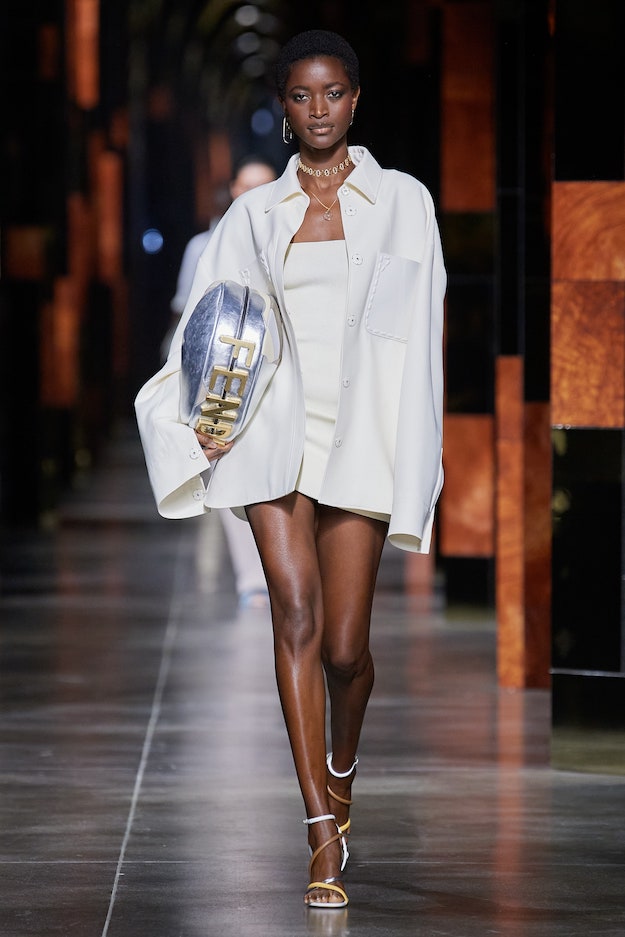 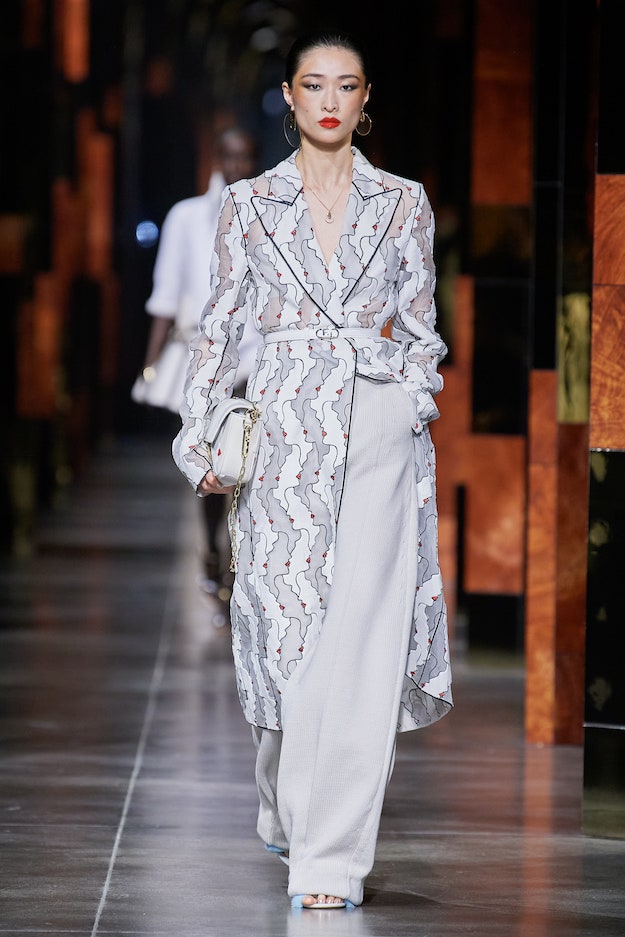 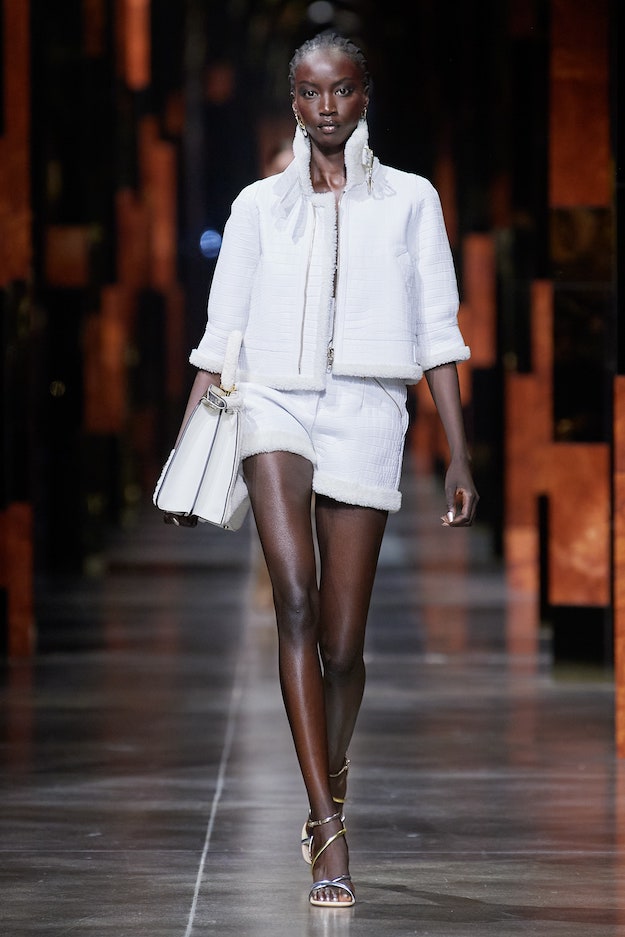 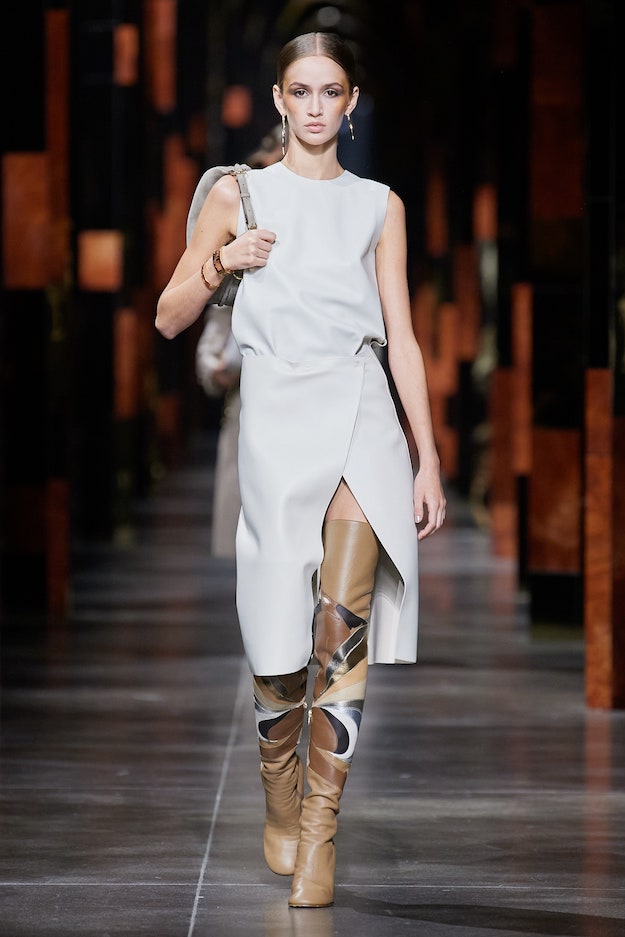 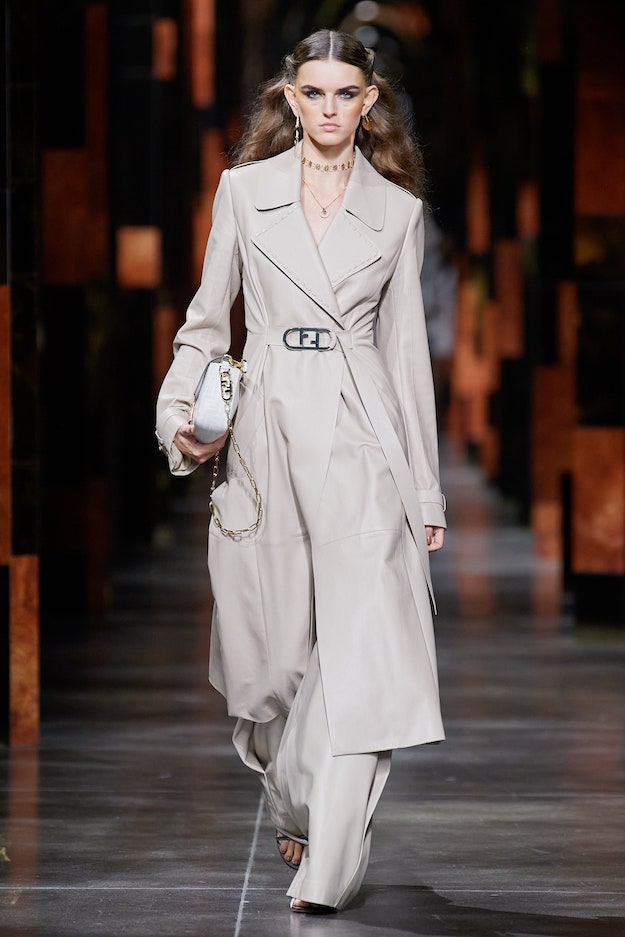 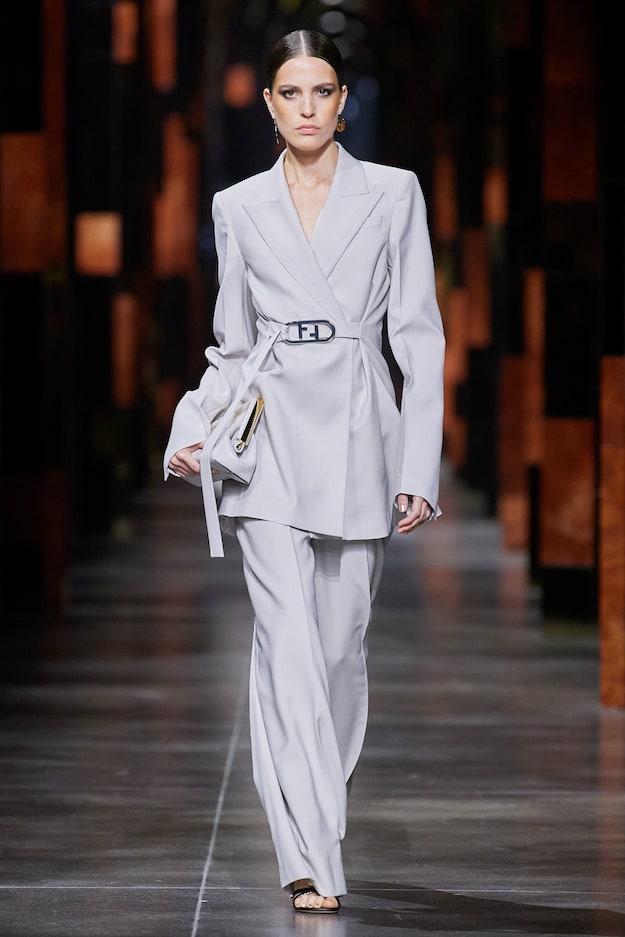 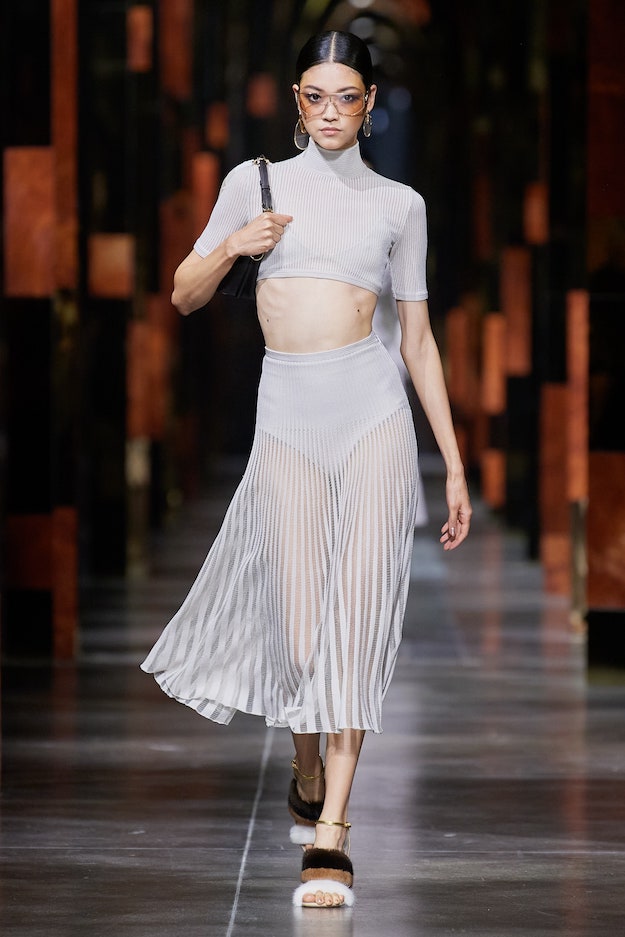 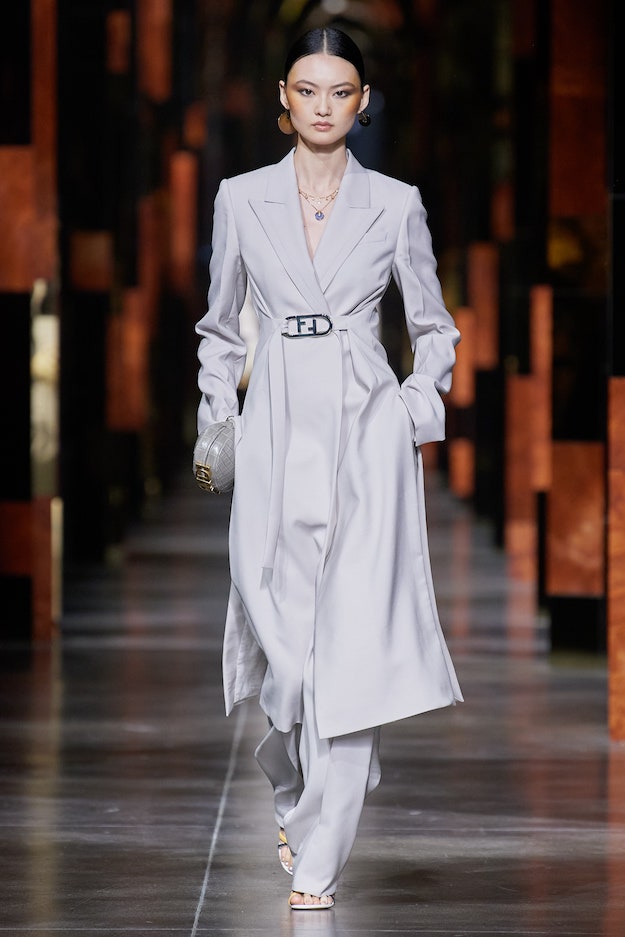 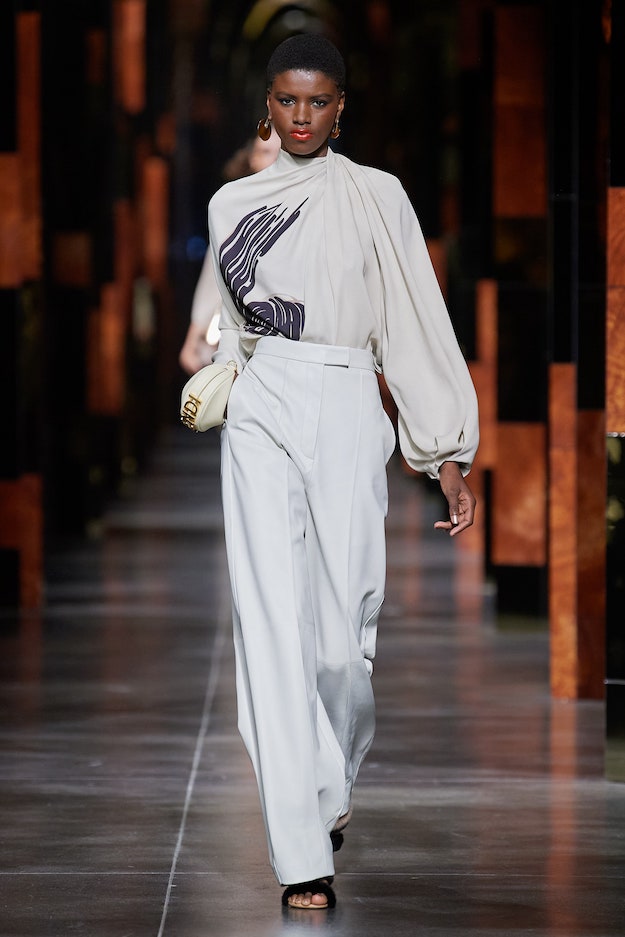 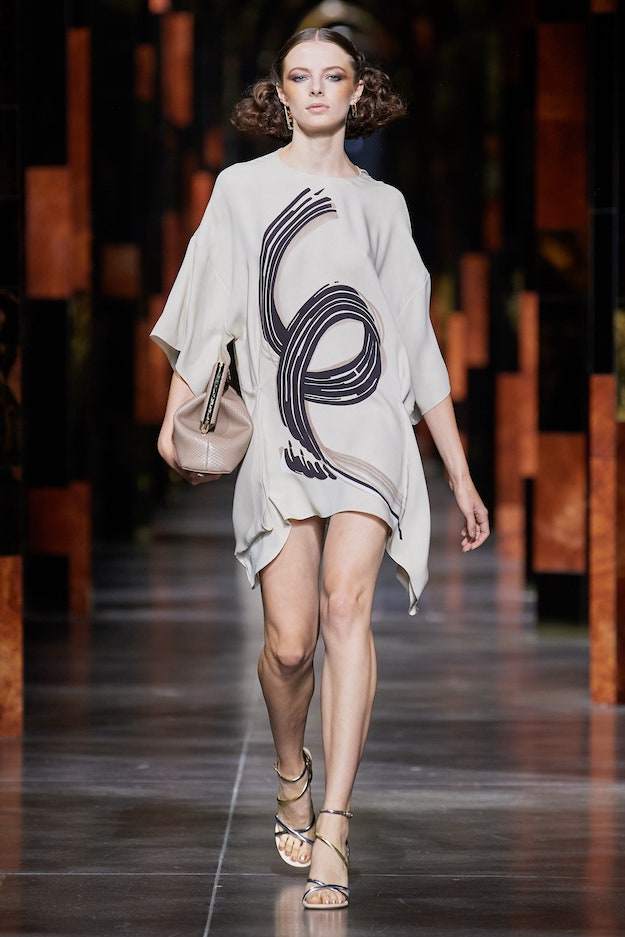 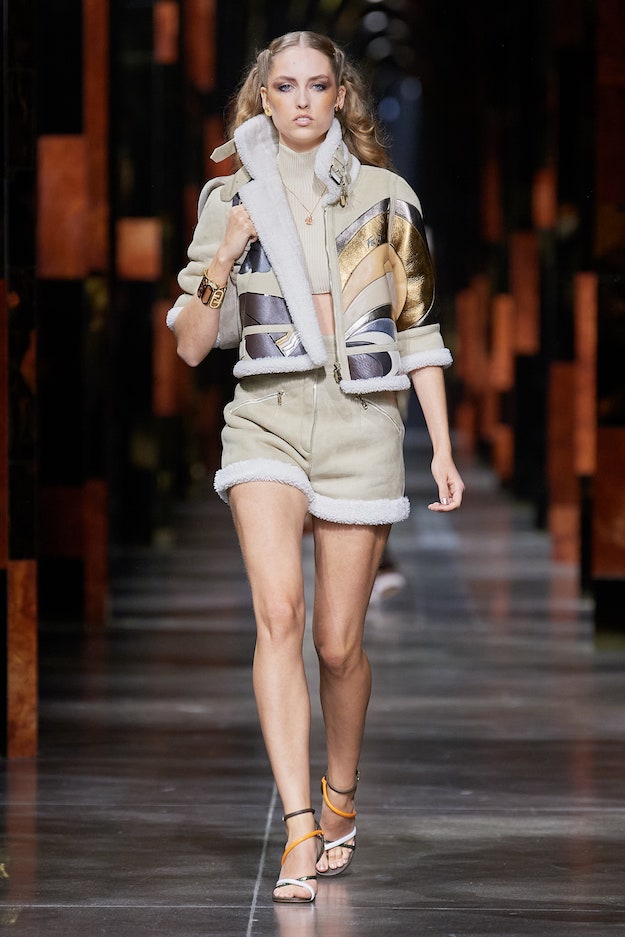 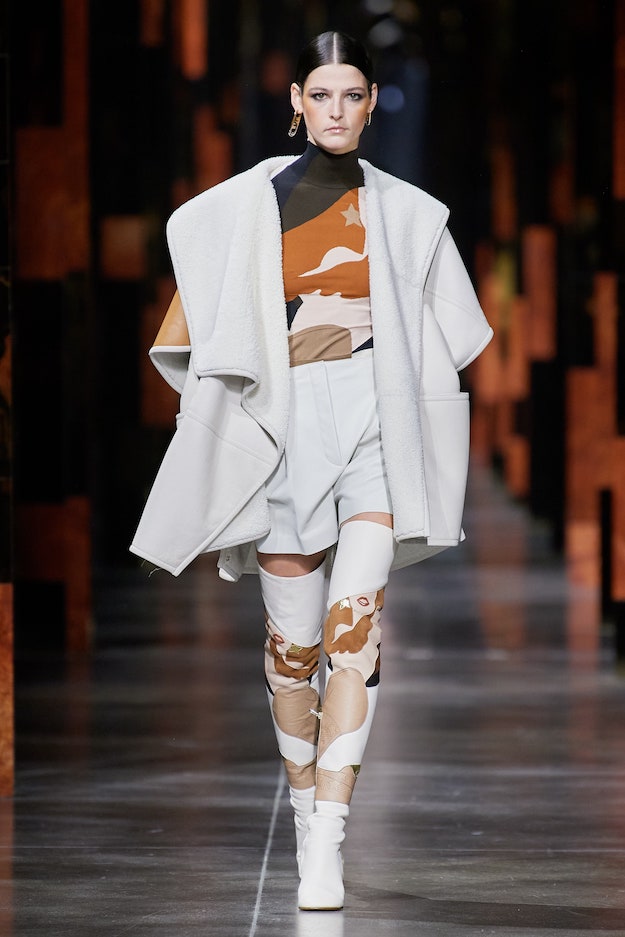 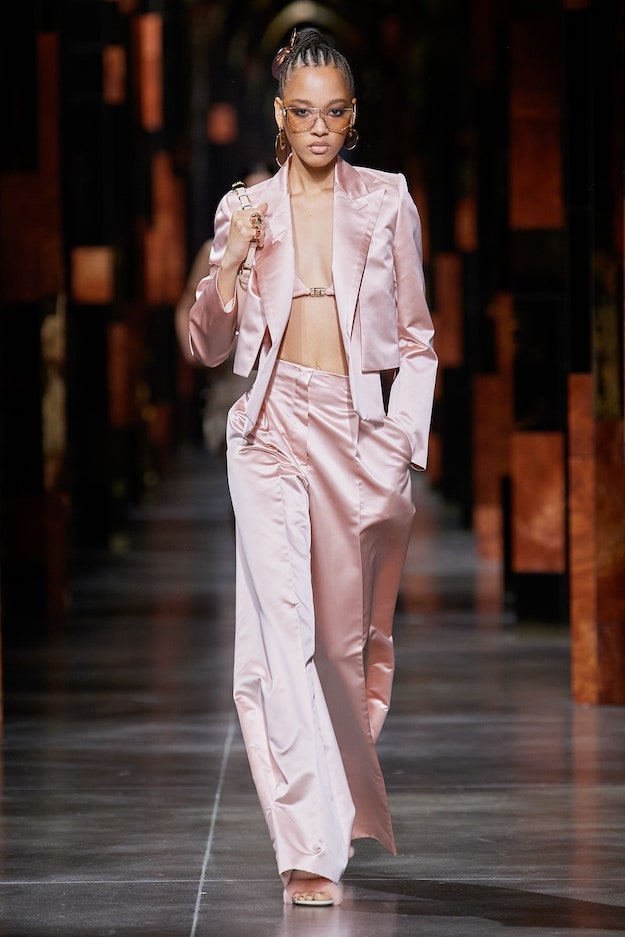 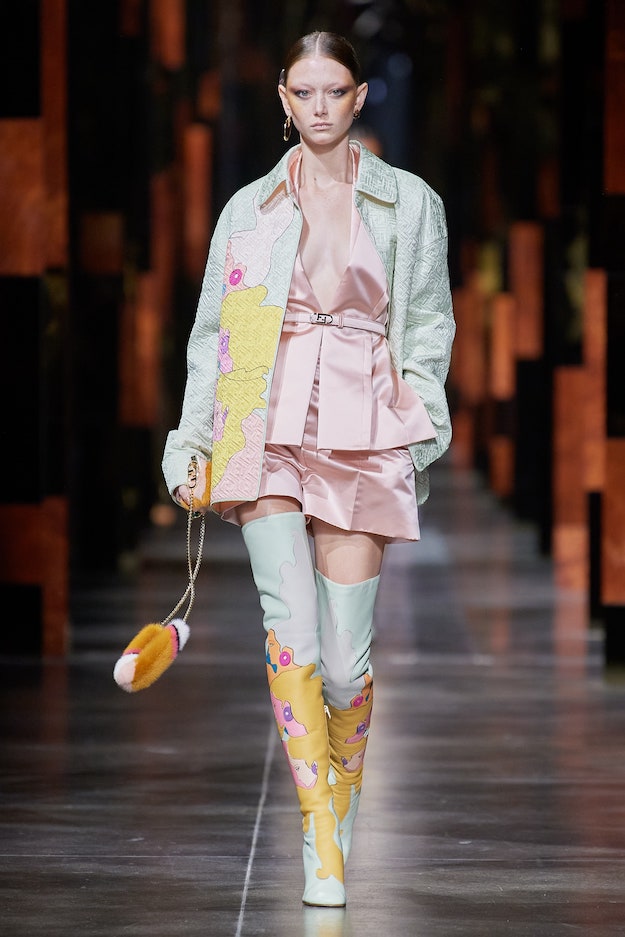 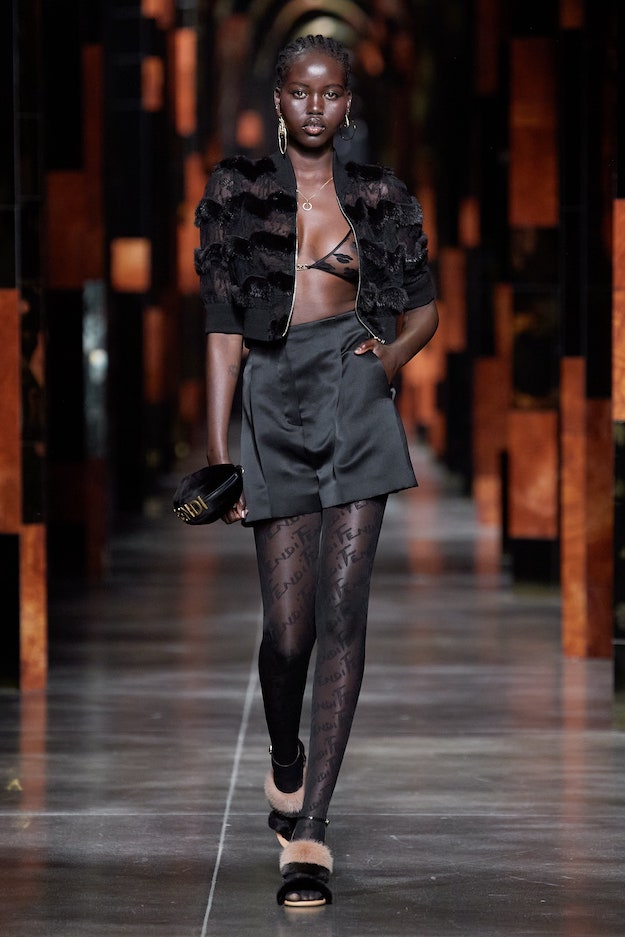 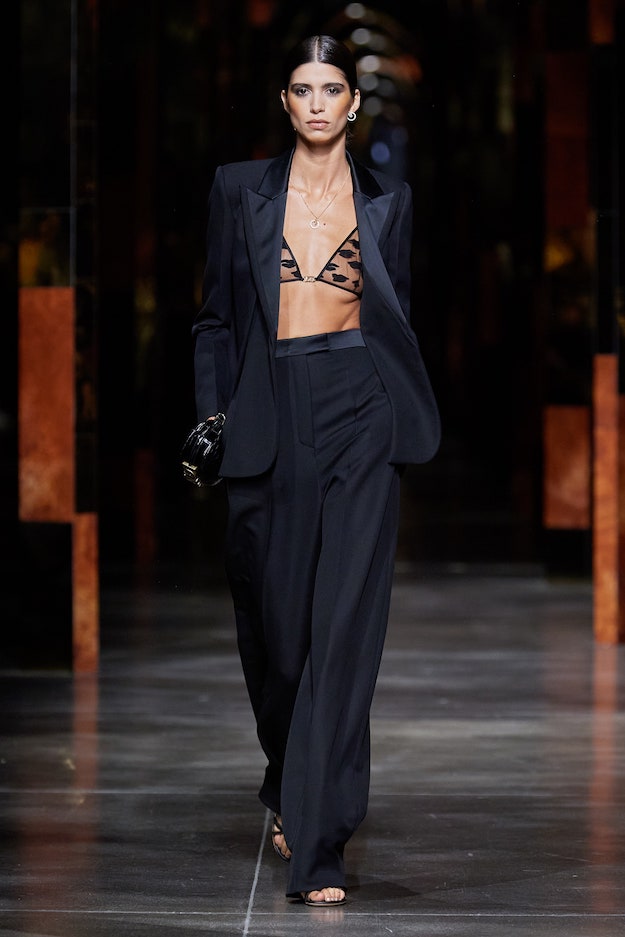